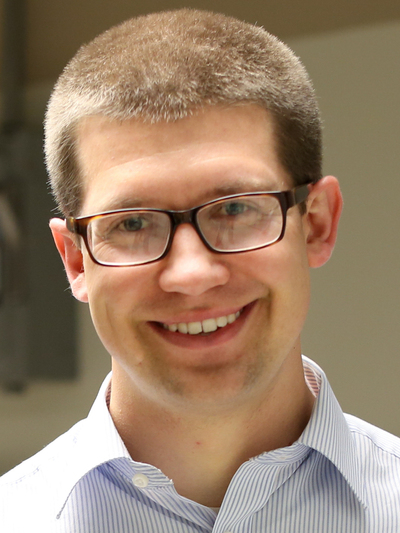 Robert Baker received a BS degree from Brigham Young University in 2007 and a MS degree from Brigham Young University in 2008. He received his PhD from Gabor Somorjai at the University of California, Berkeley in 2012 where his dissertation research focused on electronic activation of surface chemical reactions at the metal-support interface. From 2012 to 2014 he performed postdoctoral research with Stephen Leone studying ultrafast electron dynamics and interfacial charge transfer in metal oxides using transient x-ray absorption spectroscopy. He has been an assistant professor at The Ohio State University since July 2014.  He has received the Air Force Office of Scientific Research Young Investigator Award and the Department of Energy Early Career Award.

Our research focuses on the critical role that surface electron dynamics and interfacial charge transfer have on the selectivity and efficiency of catalytic energy conversion processes. Toward this goal my group has developed femtosecond soft x-ray reflection-absorption spectroscopy as a surface sensitive probe of ultrafast electron dynamics. We also study the closely related chemical reaction kinetics on catalytic surfaces. Research accomplishments and goals in three key areas related to this program are described below.

We have recently demonstrated that x-ray absorption spectroscopy can be made surface specific by measuring near grazing angle reflectance using a tabletop high harmonic generation light source. Pump-probe transient reflectivity using this femtosecond light source, is now enabling observation of ultrafast surface carrier dynamics with element, oxidation state, and spin state resolution. This gives us the ability to track the state of photoexcited charge carriers at a catalyst surface in real time with state-specific precision. Much more is currently known about molecular photophysics and photochemical reaction dynamics compared to surface photochemistry due to the inability to probe surfaces selectively with sensitivity to oxidation state, spin state, carrier thermalization, lattice distortions, and charge trapping at defect states. Femtosecond soft x-ray reflectivity developed here is now enabling such studies with the goal of advancing the field of surface chemical physics. Various applications of this work are supported by the by the Department of Energy and the Air Force Office of Scientific Research.

We have recently developed an earth-abundant copper-iron oxide catalyst showing high selectivity for CO2 reduction to acetate (i.e. a C–C bond coupling reaction). Only a handful of heterogeneous catalysts are capable of selective C–C bond coupling from CO2. This catalyst performs this selective chemistry with exceptionally high energy efficiency using a mixture of two earth-abundant metal oxides. The fundamental chemistry involved here is currently under investigation, and NSF recently funded a project to study the mechanism of C-C bond coupling from CO2 using sum frequency generation vibrational spectroscopy. This is a collaborative project with DFT theorist, Aravind Asthagiri from the Department of Chemical and Biomolecular Engineering at Ohio State University.

We have elucidated a surprising new mechanism for selective partial hydrogenation chemistry on bifunctional platinum/CeO2 and platinum/TiO2 catalysts. On bifunctional surfaces consisting of a metallic phase and an oxide phase, the interface between these two catalyst phases is commonly considered to be the “active site” for selective catalysis. However, using a series of nanopatterned surfaces, we have demonstrated that the oxide phase strongly influences selectivity of the metal catalyst for >50 nm across the actual interface. This surprisingly long length scale reveals a reaction mechanism where selectivity depends on the surface diffusion of active reaction intermediates across the phase boundary. This unexpected result significantly changes the current picture of reaction kinetics on bifunctional surfaces and provides a new set of design parameters for optimizing selectivity in these catalyst systems. We have recently received an NSF Major Research Instrumentation grant for the acquisition of a Near-Ambient Pressure X-Ray Photoelectron Spectrometer, which promises to greatly facilitate this long-term research direction.

A complete list of publications can be found here.