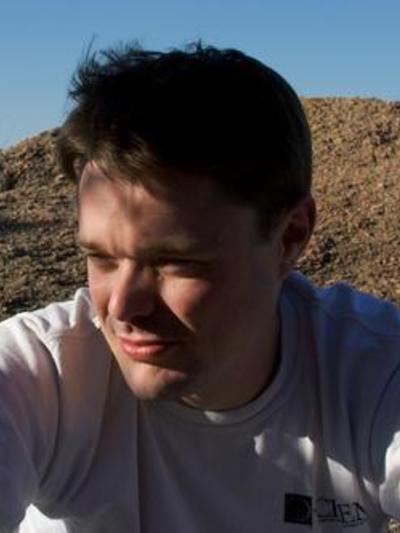 John Herbert received B.S. degrees in chemistry and mathematics from Kansas State University in 1998, where he was a Barry M. Goldwater Scholar. He received a Ph.D. in physical chemistry from the University of Wisconsin-Madison in 2003, where he was a National Defense Science and Engineering Graduate Fellow with John Harriman. This was followed by postdoctoral work with Anne McCoy at The Ohio State University and, subsequently, with Martin Head-Gordon at the University of California-Berkeley, where he was a National Science Foundation Mathematical Sciences Postdoctoral Fellow. He joined the Ohio State faculty in 2006. Professor Herbert received a CAREER award from the National Science Foundation and a Presidential Early Career Award for Scientists and Engineers (PECASE) from the White House Office of Science and Technology Policy.  Other awards include an Alfred P. Sloan Foundation Research Fellowship, the Camille Dreyfus Teacher-Scholar Award, and the ACS Outstanding Junior Faculty Award in Computational Chemistry, and an Alexander von Humboldt Foundation Fellowship.

Our group develops and applies new electronic structure models and algorithms.  The aim is to improve the accuracy but also to reduce the cost of traditional quantum chemistry calculations, which increases steeply as a function of the number of atoms in the system.  This is accomplished both by developing more efficient numerical algorithms and by improved theories and models that are intrinsically more affordable.  We are particularly interested in the behavior of electrons and holes in condensed-phase environments, where much less is known about the nature of excited states.  Our group is one of the principal developers of the Q-Chem software package for electronic structure calculations, and methods developed in our group are thereby rapidly disseminated into the broader chemistry community for use by practicing chemists.

More information on these and other projects can be found on Prof. Herbert's research group web page.

A complete publication list is available from Professor Herbert's research web page. Some representative publications from the last few years are listed here.