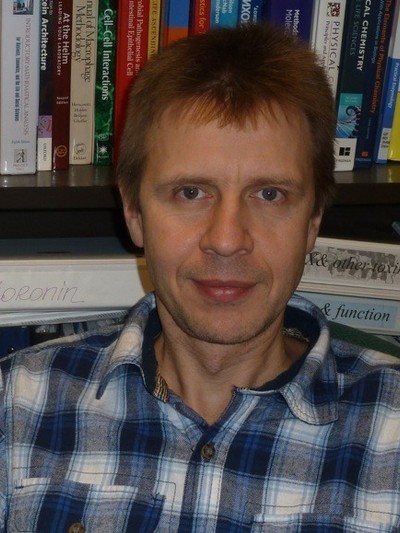 Dmitri Kudryashov received his MD from the Russian Medical State University (RGMU) in Moscow and PhD from the Russian Academy of Medical Sciences and Cardiology Research Center, where he studied the function of the Myosin Light Chain Kinase (MLCK) family of proteins (Mentors Dr. Vladimir Shirinsky and Dr. Alexander Vorotnikov). Dmitri continued his research on the actin and myosin cytoskeleton as a postdoctoral fellow at UCLA in Prof. Emil Reisler's group. For his postdoctoral work, Dr. Kudryashov received the Paul Boyer Award for Outstanding Postdoctoral Studies in Biochemistry and Herbert Newby McCoy Award. Dr. Kudryashov joined the Department of Biochemistry at OSU in 2011 and was promoted to Associate Professor at the Department of Chemistry and Biochemistry in 2017.

1. Actin cytoskeleton in health and disease.

Actin is one of the most abundant and functionally versatile proteins on our planet. As a major component of the cytoskeleton, actin serves as a track for myosin-based motility and thus is involved in muscle contraction, organelle transport, and closure of the contractile ring. In addition, polymerization of actin itself also serves motor purposes and thus drives exo- and endocytosis, cell division, migration, invasion, and other cellular processes of high physiological and pathological relevance. Invasion of cancer cells underlies metastatic dissemination of human cancers and is considered as a potential therapeutic target. Currently, our interests in this large area are focused in the following directions:

Actin is involved in the pathogenesis of infectious diseases as an element of the innate immune system but also as a target that can be hijacked by many bacterial and viral toxins. We are interested in both.

Actin binding proteins: Plastins. We investigate the role of actin binding protein plastin in functions of normal (e.g., immune, intestinal, and bone cells) and cancer cells. Recently, we showed that the bundling activity of plastins is regulated in a broad range via a robust but tunable auto-inhibitory association of its actin-binding domains (ABD1 and ABD2; Schwebach et al., 2022). The allosteric auto-inhibition is regulated by phosphorylation and likely by interactions with protein partners and allows plastins to organize actin in various types of assemblies from aligned bundles (as found in microvilli and stereocilia) to loosely arranged meshes (as in lamellipodia). The study is published in Nature Structural&Molecular Biology. The discovered domain separation opens opportunities for the involvement of plastins in mechanotransduction, which is currently under investigation.

Plastin-2 in immune cells and cancer. Of the three mammalian isoforms, L-plastin (a.k.a. Plastin-2 or LCP1), is found in immune cells but is also often elevated in tumors and associated with their increased metastatic activity. We compare the properties of L-plastin with two other human plastins (T- and I-plastins) in order to understand what makes the L-isoform particularly suitable for invasion.

Plastins in osteogenesis and beyond. For the ubiquitously expressed T-plastin isoform (a.k.a. Plastin-3), we established that mutations affecting its sensitivity to Ca2+ in either direction lead to osteoporosis (Schwebach et al., 2020). Since none of the four explored osteogenesis imperfecta mutations are located in the Ca2+-binding EF-hands region, their location allowed us to predict the hitherto unknown relationships between the actin-binding core and regulatory domains of plastins. The role of plastins in the pathogenesis of other hereditary and acquired diseases is under investigation.

Integration of research on bacterial toxins at the biochemical and cellular levels allowed us to discover or update our understanding of several highly detrimental yet very elegant pathogenic mechanisms.

Actin Crosslinking Domain. Thus, while studying ACD (actin crosslinking domain) toxin from V.cholerae (also found in several other Gram-negative bacteria) we predicted that the toxin-produced covalent actin oligomers should possess highly unusual properties that great amplify the toxicity. Indeed, we found that ACD is highly effective even at very low doses, when only a small population of actin in the affected cells is cross-linked. We discovered that the cross-linked oligomers bind tightly and interfere with the activity of several families of vital cytoskeletal proteins (e.g., formins, Ena/VASP, NPFs, Spire, and Cobl). This potent toxicity is due to avidity (i.e., multisite interactions) of the oligomers to G-actin domains, several copies of which are present in all of the targeted proteins. This study is funded by NIH IGMS R01 grant and published in Science, Current Biology, and other journals (Heisler el al. 2015; Kudryashova et al. 2018).

TccC3 toxin of Photorhabdus Luminescens.  P. Luminescens is a glowing killer of insects that produces several toxins targeting the actin cytoskeleton. We added to the understanding of the toxin's pathogenic mechanisms by showing that TccC3 can modify (ADP-mono-ribosylate) only filamentous actin (F-actin) and only its most dynamic subpopulation free of tropomyosin (Dong et al., 2022). Furthermore, we confirmed the previously established inhibition of actin disassembly by ADF/cofilin, but also showed that it is effective only when actin is heavily modified. We discovered that bundling of the modified actin by tandem-CH domain proteins (e.g., plastins and α-actinins) is strongly inhibited, which correlates with potent uncoupling of the cortical actin from the cytoplasmic membrane that reveals itself as profound blebbing.

Other actin-specific toxins and tools. Many more exciting mechanisms of actin-specific are under investigation, some of which will be published soon, while others would have to wait. Currently, we are exploring the effects on the actin cytoskeleton of ADP-ribosylating toxins produced by salmonella, clostridium, aeromonas, and other bacteria, along with the actin-nucleating (and more, check again soon!) vibrio toxins VopF and VopL as well as actin-bundling (and more!) toxins VopM and VopV. Keep tuned, and you will not be bored! With the enriched knowledge of these and other toxins' mechanisms, we will soon be way better equipped with powerful toxin-based tools for studying the role of actin in various cellular events (e.g., inflammation, apoptosis, DNA-repair, etc.).

Several bacterial toxins have attracted significant interest as potent antitumor agents (called immunotoxins) due to their incredible toxicity (yes, protein toxins are the deadliest compounds on the planet!), potential selectivity, ability to penetrate the cell membrane, high resistance against host defense systems, and demonstrated capacity to kill cells by mechanisms independent of the drug-resistant phenotypes of most tumors. Yet, the specificity of the currently recognized toxins towards tumor cells is limited due to i) a cross-specificity of the toxin receptors; ii) non-specific acquisition of the immunotoxins by metabolically active tissues. To address the problem, we split toxins into two inactive parts and deliver split variants of potent bacterial toxins via two different pathways uniquely represented only on the surface of cancer cells. The idea is that the fully functional toxin will be assembled only in the cytoplasm of a doubly targeted cancer cell. The first proof-of-principle study was funded by NIH NCI R21 and Pelotonia (OSU CCC) grants, patented, and published in PNAS (Purde et al. 2020).

Defensins are a family of short cationic immune peptides with a broad repertoire of anti-microbial activities. Defensins disorganize bacterial cell membranes and inactivate bacterial toxins and viral proteins while showing little effect on the host's proteins. The amazing selectivity of defensins against various unrelated toxins remained a major puzzle until recently. We proposed and demonstrated that the elusive property targeted by defensins is not a particular sequence but thermodynamics plasticity of the toxins, which is a necessary element for their effective molding from soluble to membrane-embedded molecules or for unfolding required for translocation into the host cell cytosol via narrow pores. The study was published in Immunity, Scientific Reports, Biochemical Journal, Journal of Molecular Biology, and other journals.

The lab welcomes enthusiastic and energetic biochemists, cell and structural biologists, and biophysicists at all levels: undergraduate, graduate, and postgraduate. To express your interest in joining the group, please email Dr. Dmitri Kudryashov.