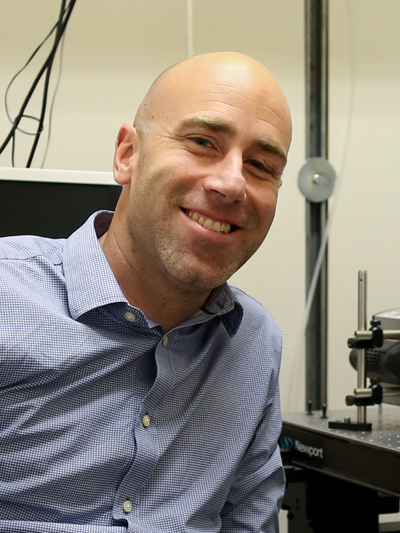 We are working to understand how our genomes are expressed and repaired while being tightly compacted into chromatin. We currently are focused on three research programs. The first program is to determine how histone post-translational modifications in structured regions of the nucleosome alter chromatin structure and dynamics. The second program is to determine how DNA mismatches are recognized and repaired in chromatin. The third program is to understand how the mechanical properties of DNA is important for DNA-protein interactions. We use an interdisciplinary approach that combines biochemical and biophysical techniques, which includes: restriction enzyme studies, cyclization experiments, nucleosome mapping, steady state Fluorescence Resonance Energy Transfer measurements (FRET), stopped flow FRET, fluorescence correlation spectroscopy, single molecule force and twist measurements with magnetic tweezers and single molecule FRET measurements. Because of our interdisciplinary nature, collaborations are essential for our success. We have developed close collaborations with the Ottesen Lab, the Fishel Lab and the Bundschuh Lab.

Histones function to organize and compact our genomic DNA into nucleosomes and chromatin while histone modifications function to facilitate and regulate biological process that involve DNA-protein interactions, such as RNA transcription and DNA repair. The nucleosome contains 2 of each core histone protein: H2A, H2B, H3 and H4, and 147 base pairs of DNA This structure is densely repeated along our genomic DNA so that our chromosomes contain about 20 million nucleosomes, and creates long chromatin fibers. There are over 100 known post-translational histone modifications; however the molecular functions of most of these modifications are not well understood. Histone modifications are thought to function in one of two ways: (i) to create a protein binding site and (ii) to directly modify the structure and/or dynamics of chromatin. A majority of modifications are located on histone tails, which are unstructured regions of the nucleosome and emanate from the nucleosome core making the tails accessible for protein binding. However, recent mass spectrometry studies have revealed that there are over 30 modifications in the structured region of the nucleosome and 15 of them are located within the DNA-histone interface of the nucleosome. My lab is focused on four histone H3 modifications that are positioned within structured regions of the nucleosome. We are experimentally investigating models of how histone modifications function while buried within the DNA histone interface of the nucleosomes. We collaborate with Prof. Jennifer Ottesen (OSU), who constructs homogeneously modified histone H3 proteins using Expressed Protein Ligation, which is a powerful technique for the introduction of chemical modifications into one region of a protein. We are investigating molecular models of PMT function with a multidisciplinary approach that includes the restriction enzyme kinetics method, nucleosome mapping, histone binding affinity measurements, steady state Fluorescence Resonance Energy Transfer measurements (FRET), stopped flow FRET, fluorescence correlation spectroscopy, single molecule force and twist measurements with magnetic tweezers, and single molecule FRET measurements.

DNA mismatch repair occurs by excision of the mispair-containing DNA strand and resynthesis of the resulting gap using the remaining DNA strand as a template In eukaryotes, mismatch repair must occur while the DNA is packaged into chromatin, yet little is known about how MMR proceeds within chromatin and the molecular roles post-translational modifications play in mismatch repair. We are working with Prof. Richard Fishel (OSU) to understand the recognition of MMR in chromatin. This work naturally builds on our work on histone modifications and is a key step in understanding the molecular basis by which DNA mismatches are repaired in our cells.