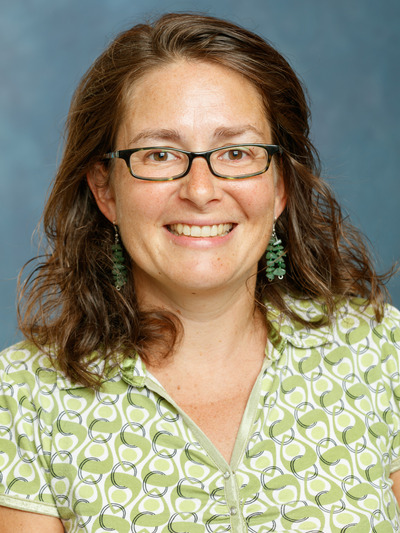 Jane E. Jackman received her B.S. in Biochemistry from the University of Rochester, Rochester, NY, where she studied electron transfer reactions catalyzed by the cytochrome c:cytochrome c peroxidase system in the lab of George McLendon. She received her Ph.D. degree in Biochemistry from Duke University in Durham, NC, working with Carol Fierke and Chris Raetz to investigate the catalytic mechanism of a metal-dependent metalloamidase (LpxC), a target for novel anti-microbial compounds that catalyzes the committed step during biosynthesis of the lipid A component of lipopolysaccharide. As a post-doctoral fellow in the laboratory of Eric Phizicky at the University of Rochester School of Medicine, she participated in identification of several previously undiscovered tRNA modification enzymes, including several that exhibit novel enzyme chemistry. Jane joined the faculty of Ohio State in 2007 as an assistant professor in the Department of Biochemistry. She is a member of the Ohio State Biochemistry Program (OSBP), Molecular, Cell and Developmental Biology graduate program (MCDB) and the Ohio State University RNA Center.

The Jackman laboratory utilizes the principles and techniques of mechanistic enzymology and enzyme kinetics to elucidate the molecular mechanisms of tRNA processing enzymes. These techniques allow us to investigate issues of fundamental chemical importance, such as the mechanism of a previously unknown reverse polymerase, which catalyzes nucleotide addition in the opposite direction to all known polymerases. These same principles of mechanistic enzymology, in combination with the powerful approaches of yeast genetics and molecular biology, also allow the lab to investigate the biological function of enzymes in living cells, including a tRNA splicing enzyme and a tRNA methyltransferase whose biological roles in the yeast Saccharomyces cerevisiae are well-defined, but whose possible role(s) in other organisms remain a mystery. Initial projects in the laboratory will focus on several recently-discovered tRNA modification enzymes.

tRNAHis guanylyltransferase (Thg1). Thg1 is an essential enzyme in yeast, which catalyzes the highly unusual addition of a G-residue to the 5' end of tRNAHis. Thg1 is the only enzyme known to catalyze nucleotide addition to a polynucleotide chain in the 3’-5’ direction, opposite to the direction of nucleotide addition in all known DNA or RNA polymerases, and the mechanism by which Thg1 catalyzes this reaction is unknown. Moreover, we have recently shown that Thg1 catalyzes an authentic 3’-5’ templated polymerase activity, which is distinct from its role in tRNAHis maturation (Jackman and Phizicky, 2006). This finding suggests that there may be additional cellular roles for Thg1 in yeast or other organisms. Since Thg1 catalyzes a fundamentally new activity and furthermore displays no obvious homology to any known enzyme family, the mechanism by which it catalyzes this unusual reaction is likely to be of interest and exhibit features that have not been previously observed in other enzyme families. The Jackman laboratory aims to define the active site residues, mechanism, and substrate recognition requirements for each of these activities (G-addition vs. 3’-5’ polymerization) in yeast Thg1 compared with Thg1 from other organisms with the goals of defining the enzymatic mechanism for each of these two unusual activities as well as separating these two activities from each other and therefore allowing us to address the cellular role(s) for each activity.

tRNA m1G9 methyltransferase (Trm10). Trm10 catalyzes the methylation of guanosine residues at position 9 of several tRNA species, a modification that is conserved throughout eukaryotic tRNAs (Jackman et al., 2003). Trm10, like Thg1, is a member of a previously undescribed family of proteins with no identifiable homology to any other enzyme family, including other S-adenosyl-methionine (SAM)-dependent methyltransferases. Therefore, determination of its molecular mechanism is likely to yield new insights into the catalysis of methyltransfer reactions. Initial characterization of Trm10 yielded the surprising result that up to three different Trm10 homologs exist simultaneously in several metazoans, including mouse and humans, while in yeast, the single Trm10 protein catalyzes all known m1G9 modifications. Therefore, comparison of the activity, mechanism, and substrate specificity of Trm10 homologs from yeast and other organisms will help to address whether the multiple homologs function redundantly, or whether there are additional, previously undescribed, cellular roles for the multiple Trm10 enzymes in higher eukaryotic organisms.

Jackman JE, Phizicky EM. (2006) "tRNAHis guanylyltransferase adds G-1 to the 5' end of tRNAHis by recognition of the anticodon, one of several features unexpectedly shared with tRNA synthetases." RNA 12(6):1007-14.