Sherwin Singer received his A.B. 1976 from University of Chicago, and his Ph.D. in 1984, also from the University of Chicago, where he was a National Science Foundation predoctoral fellow working with Karl Freed. He subsequently did postdoctoral studies with David Chandler at University of Pennsylvania, and John Weeks at AT&T Bell Labs. Sherwin Singer has been a faculty member at The Ohio State University since 1987, being promoted to Associate Professor in 1992 and Full Professor in 2003. He was awarded the Camille and Henry Dreyfus Distinguished New Faculty Award in 1986, and the Dozor Fellowship from Ben-Gurion University of the Negev in 1998.

Everyone thinks of ordinary ice (ice Ih) as one of the most familiar examples of a crystal. However, the ice cubes in your freezer are not fully ordered crystals. If you took molecular models and built ice crystals like the ones shown below, you would see that there are many Ice Ih different ways to link the water molecules together so that the oxygen atoms form the well-known hexagonal ice Ih lattice. Some of the possible arrangements of H-bonds are shown in the animation. Because there are many different ways to link the molecules in ice with hydrogen bonds, ordinary ice is a disordered material. Other ice phases are also disordered, ice III, V, and VII to name a few. We now believe that if you cool each of the disordered ice phases to a low enough temperature, they will undergo a phase transition to a structure in which a single hydrogen bond pattern is selected. Ice Ih "freezes" into ice XI, ice III into ice IX, ice V into ice XIII, ice VII into ice VIII, and so on. Our work provided the first theoretical calculations that correctly predicted the properties of these phase transitions. This work has been supported by the National Science Foundation.

Working in collaboration with biomedical engineers who design nanoscale devices for drug delivery, we have study flow in a very small channel -- "nanofluidics". We are particularly interested in flow induced by applying an electric field to an electrolyte within nano-scale devices. This is an efficient way to transport fluids within tiny spaces with a high degree of control. In the flow simulation shown on the right, a sodium chloride solution is driven through a "nano-nozzle". The nozzle is made of amorphous silica dioxide (better known as glass). This work has been supported by the National Science Foundation through our participation in the NSEC (Nanoscale Science and Engineering Center) at Ohio State.

Enzyme function requires movement of protein, substrate and water. Without water motion, most proteins lose biological activity. We have analyzed experiments in which a part of the protein absorbs a photon. For example, the indole portion of the tryptophan residue of the enzyme thioredoxin, pictured on the right, can absorb, and later emit, a photon. This alters the charge distribution near the chromophore, and causes both the protein and water to adjust to the new charge distribution. These relaxation processes are reflected in the change in emission wavelength with time (fluorescence Stokes shift). Our calculations provide insight into the contribution of factors like protein flexibility and solvent motion to the observed Stokes shift. Another area of interest is the repair of cyclobutane pyrimidine dimers, the most prevalent form of light-induced damage of genetic material. This work has been funded by the National Institutes of Health.

We have developed theories for complex 2-dimensional fluids that spontaneously generate patterns. Our work, like the computer simulations shown on the left, explains the appearance of stripes, bubbles, or intertwined snake-like structures which are experimentally observed in a surprisingly wide variety of physical systems: thin magnetic films, insoluble biomolecules at an air-water interface (Langmuir monolayers, like the layer of lung surfactant that line the surface of alveoli), and adsorbed molecular monolayers on a crystal surface. 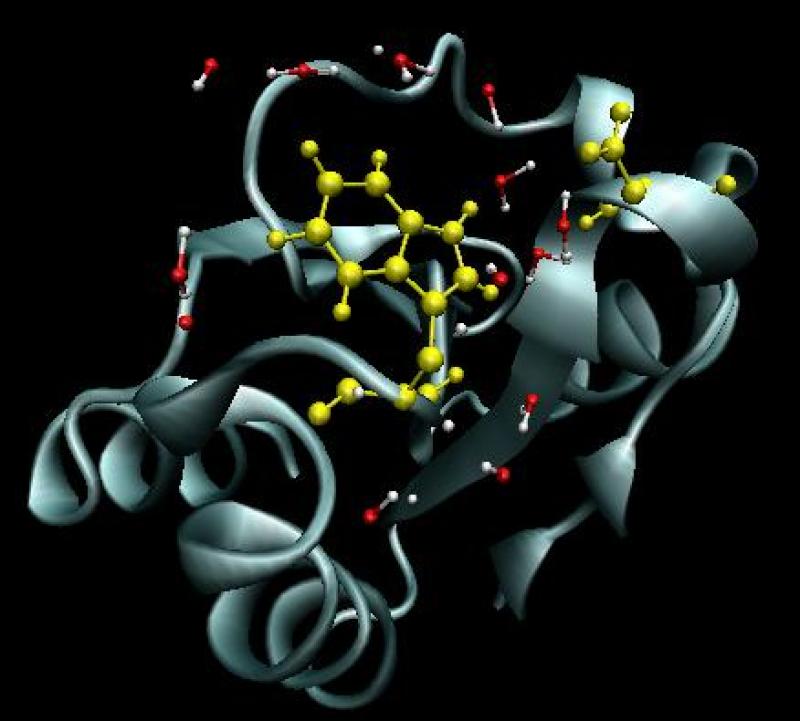